Two Bren teams, each consisting of gunner and assistant gunner with slung parts kit. One team advancing and one team firing.

The 1er Batallion d' Infanterie de Marine (BIM), stationed in Chad, fought the Italians in 1941-2 until it became part of the 1st Free French Division (1er DFL) in 1943. This is one of the units that fought at Bir Hakim. 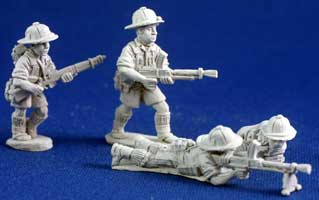